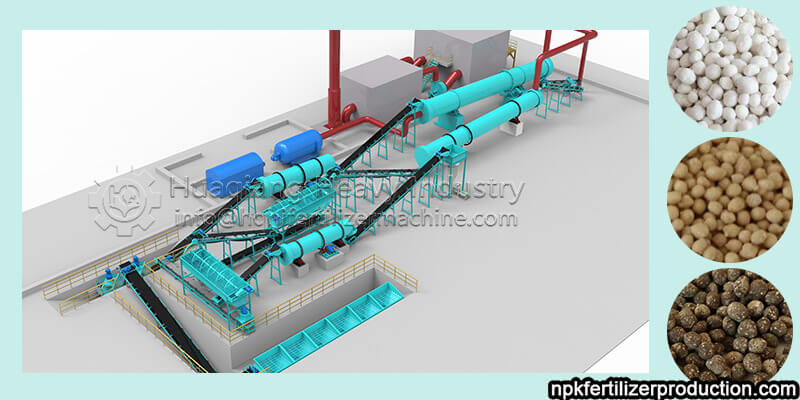 The small-molecule organic compound fertilizer was tried on rice planting. The amount of rice was 40-50kg per acre during the whole growth period. It was used in the base fertilizer, tiller fertilizer, and ear fertilizer period respectively, and the average grain yield increased by 36kg/667㎡. Variety of fertilizers to achieve an increase in output and efficiency of 55 yuan/667 square meters. The application of modified urea in the experimental paddy field has achieved significant labor saving, cost saving and income increase, and the quality has been improved.
The mixed urea and NPK fertilizer are made into granules in proportion by double roller press granulator, which improves the fertilizer efficiency of original urea. Compared with ordinary urea, the yield of rice increased by 10% per mu, and the fertilizer application time of farmers was reduced, and the transportation cost was saved.
The compound fertilizer processed by NPK fertilizer production process has been applied to improve the quality and taste of fruits and vegetables. Compared with the use of ordinary urea, the yield of compound fertilizer per mu is increased by 20% - 40%.
It can keep bolls, reduce bud shedding, prolong flowering and boll opening periods, increase silk length and silk whiteness, and greatly improve the yield and grade of cotton. Compared with the use of ordinary urea, the yield per mu is increased by 10% - 25%, and the cotton fields with modified urea are sold at a good price.
Using it on soybeans can prolong the flowering period and pod setting period, greatly increase the number of pods, and the grains are full, which increases the yield per mu by 15% to 30% compared to using ordinary urea.
A large number of experiments have proved that the new urea fertilizer processed by the NPK fertilizer manufacturing process fully meets the needs of modern agricultural production.

Next:Which NPK fertilizer process is most suitable for potassium chloride and sodium chloride